The Irish National Lottery main draw is a 6 from 45 game. That is, you choose 6 numbers on your playslip, from the numbers 1 to 45. Match 6 numbers and you win the jackpot of a guaranteed minimum prize of €2 Million.

As far as lottery odds go, that's a pretty decent 1 in 8,145,060 chance of winning, making the Irish Lotto an interesting game for syndicates.

More About The Games 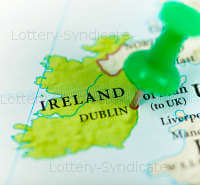 Ireland runs a number of different games, with the main Lotto game drawn every Wednesday and Saturday being the most popular. Alongside EuroMillions of course which is hugely popular in Ireland and all over Europe. (You can find the EuroMillions lottery syndicate reviews here)

But they also run a few add-on games too. Lotto Plus adds an extra two draws (imaginatively named Plus 1 and Plus 2), for which you can tick a box on your playslip to also play your main Lotto numbers for these extra draws too. This costs only 50c extra to cover both extra draws.

Due to the popularity of EuroMillions, they have also added on a 'Plus' game here too, called EuroMillions Plus. Tick the box to add this to your main entry and your 5 main selected balls go into the supplementary Plus draw for a cost of €1 per panel.

Then we also have Daily Million. Which, and you have to give credit to them for clearly naming their games, is drawn every day and has a jackpot prize of €1 Million. This one is a 6 from 39 draw and costs €1. There is no rollover for this game however so the jackpot is fixed.

And finally there are also some less interesting games in the form of Lotto 5-4-3-2-1, Telly Bingo and the usual scratch cards.

The jackpot for the main Irish Lotto game doesn't get quite as big as some games, which is obviously the trade-off for it being much easier to win. But it always starts at €2 Million, and regularly reaches €5 and €6 Million. Most of us would be quite happy with that, even if we did have to share it.

These are the odds for the main Lotto draw:-

They also pay out smaller prize tiers ranging from a free scratch card for matching 3, up to the €3,500 for 5 plus the bonus.

For EuroMillions Plus the prize is a fixed €500,000 for matching all 5 main numbers drawn. Due to playing with only the main numbers and not the lucky stars, this game is a 5 from 50 draw making the jackpot odds 1 in 2,118,760.

The first Irish lottery draw was 16th April 1988. And originally it was a 6 balls from 36 game - almost easy to win compared to some lottery games!

This is a great game for a lottery syndicate, so it comes as quite a surprise to find only a few seem to be available online. If you run one, do tell us, because people are waiting to join!

It used to be quite difficult to spot the official site, but thankfully after a much needed redesign and update it does now look a lot more professional. you can find the official site here at www.lottery.ie. If you're not familiar with it, the .ie is the official country code for websites in Ireland.