The Eurojackpot lottery is now played across 16 European countries. Whilst still a newcomer Eurojackpot syndicates are starting to appear.

Read more about the Eurojackpot game below, or start with the online syndicates that are available so far here:-

Want to list your lotto syndicate? Submit it for review here 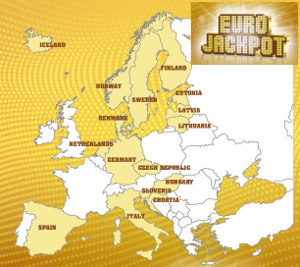 The Eurojackpot lotto game has been running since 17th March 2012, but unless you live in one of the operating countries you've probably not heard about it yet.

Launched as a serious rival to the big EuroMillions game, this young upstart has already claimed 16 countries as participants - more than EuroMillions which has only 9.

Jackpots Of Up To €90 Million

The jackpots are comparable to it's big Euro brother, starting at €10 Million and are able to reach up to €90 Million. They will also likely grow further and tend towards bigger rollovers as the game becomes more popular, and as more countries potentially join. The Czech Republic and Hungary were the latest, both joining in October 2014.

The biggest Eurojackpot winner to date was claimed by the Czech Republic - one of the two newest countries to join the game - on 15th May 2015. The jackpot reached the capped amount of €90 Million so will not now be beaten unless the game rules change.

How Does The Game Work

The game is a 'Powerball' type game, where two sets of balls are used. The main draw is 5 numbers from a pool of 50, with 2 supplementary numbers, called Euronumbers, drawn from a pool of 10 (this was increased from 8 on 10th October 2014).

All 5 main balls plus the 2 Euronumbers must be matched for a jackpot win. This gives overall jackpot odds of 1 in 95,344,200 - still easier to win than EuroMillions, but no longer by very much.

The draw itself is made once per week on a Friday evening, in Helsinki (Finland).

Here's a video of a live draw courtesy of the Croatian lottery company:

How Much To Play?

The standard ticket price is €2 per line. Syndicate prices will of course depend on the operator.

Here's a breakdown of all the current prize tiers available and the odds of winning them:

To win something you therefore need to match at least 3 balls - either 2 main balls and 1 bonus, or 1 main ball and 2 bonus balls (or of course, 3 main balls).

15 May 2015: The jackpot cap is finally hit - a payout of €90 Million goes to newcomer the Czech Republic.
5 Dec 2014: Germany almost reclaims the jackpot title with a big win of €58 Million.
20 Oct 2014: Two new countries join the game - welcome to the Czech Republic and Hungary.
12 Sep 2014: Finaland breaks the record again with a new biggest jackpot ever of €61 Million.
4 Apr 2014: Finland claims the new record jackpot of €57 Million.
12 Apr 2013: A new record jackpot is set by a player in Germany at more than €46 Million.
1 Feb 2013: Exciting times for the Eurojackpot lottery as 6 more countries all sign up taking the total to 14 European countries. The new additions are Sweden, Lithuania, Iceland, Croatia, Latvia and Norway.
31 Jan 2013: Sadly the rolldown rule is removed from the game - meaning greater jackpots but less opportunities for strategic players.
30 Jun 2012: Spain has officially join the game.
23 Mar 2012: First draw takes place with 7 European countries taking part.
17 Mar 2012: Tickets go on sale for the first ever Eurojackpot draw.

There is an official website of sorts for the Eurojackpot game, but it's an absolute bare minimum website which consists mainly of links to all the official operators in each of the participating countries. But you can find that site here. 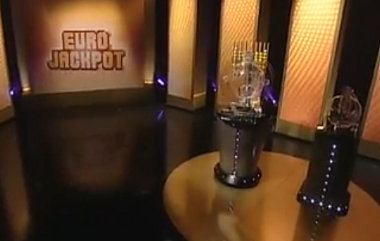