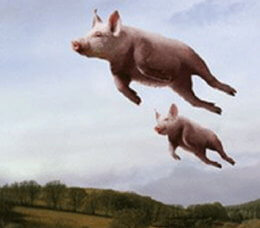 So here's how to pick those that are more likely.

If like most people you were happily nodding along to that 'fact', then you've probably been the victim of the lottery prediction industries' cruel misinformation campaign.

Because there is no such thing as an unlikely combination. It just doesn't exist.

But I bet you've been told how certain combinations should be avoided. Because they are 'unlikely', or 'will never be drawn'.

The huge flaw in that argument though, is that they simply haven't been drawn YET.

Unsure? How Many 'Unlikely' Combinations Are There...

Put it this way. How many different combinations have ever been drawn in the lottery since the day it began?

Nobody knows that off the top of their head, of course. But if you think about how many draws there have actually been, things start to become clearer.

Most big lottery games are drawn once a week, some twice. But virtually every lottery game in the world has been running less than 60 years, most a lot less.

Now compare that to the number of possible lottery winning combinations. Even for a 6 balls from 49 game, there are 13,983,816 possible results. (With a game like the US Powerball it's over 175 Million - more than 12 times as many!)

Even if no results have ever been repeated, that still leaves 13,973,416 combinations that have never been drawn. Ever!

So does that make all of these 'unlikely' or 'bad combinations' to choose... or just the 44 sets of these that are actually consecutive...

No. It really doesn't.

There is only difference between the two sets of numbers. This combination is boring.

So why do we feel it's different?

Purely because our brain is hard-wired that way. We are designed by nature to see patterns in things. We're also trained at school to see these patterns too.

See what I mean - we're already writing the number '8' before finishing reading the question..!

But our brains are fooling us. Remember, the numbers in a lottery don't really mean a darn thing. They are only there to make it easy to pick numbers and check results - what we're really picking are ping pong balls bouncing around in a big tumbler.

Let's take that same lottery game, and scrub the numbers off the balls.

Instead we put a different picture on each ball. Whatever floats your boat - different cars, birds, bikes, or er, boats.

Or perhaps were they are always just as likely to be the winning combination as any other set of numbers...

The truth is, that the real winning combos only ever happen after the draw has been made. At the time when somebody somewhere discovers that their ticket was the lucky one.

You can make yourself more likely to win by covering more of the possible combinations, i.e. by buying more tickets. But a random quick-pick ticket is just as likely to win as any other. It's designed to be that way, or it wouldn't be a fair and legal game.

Why Do Lottery Systems Suck?
How To Play Euro Millions?
What Is A Lottery Syndicate?
What Countries Play EuroMillions?
How Does The EuroMillions Millionaire Raffle Work?