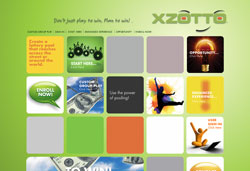 This is an oddity. It claims to be all about creating a 'lottery pool'. Which it sort of is, but NOT in any way you would think!

Xzotto Is NOT A Lottery Pool

What are lottery pools? - well, they are all about pooling money to buy tickets and then sharing the winnings. And fundamentally that's NOT what Xzotto do.

So What Is Xzotto?

They have two different types of membership. You should be interested in the normal 'free' player membership. But here's why you definitely won't be. Because here's what you get:-

You might have to read that list again to believe it. Because this is like buying a lottery ticket in your normal store, but then having to give half of anything you win to the people who were in the queue behind you..!

The other type of membership is about promoting Xzotto to other people. You pay an initial $30 fee plus $25 per month. You do NOT get ANY lottery tickets for that. This is purely a 'subscription for the Team Management Software'. But given this is just the online admin software required to run the business anyway, this 'benefit' seems dubious at best.

(To be fair, you can apparently also use it to manage your own proper lottery pool, but is it $300 a year better than just using a spreadsheet..?)

Well, you pay your $25 per month which then allows you to introduce your friend 'Bob' to your 'pool'. So long as he is willing to pay $25 per month to do the same. Then you both buy your lottery tickets through Xzotto. So you get paid some of Bob's $25. And if Bob's ticket wins, you get paid some of that too. So what does Bob get? Well, not much really, until he goes out and finds some more Bob's...

As a lottery pool Xzotto sucks. Mainly because it doesn't know what a pool is. As a free member you get worse than nothing. As a paying member you get little to nothing of any real value, and then have to work to gain any benefit by inflicting the same position on others..!

If you want a lottery pool playing the Mega Millions or one of the other US games then this is not it (head back to our main USA Lottery Syndicates reviews).

If you want some kind of home business, surely it can only make sense to create or find one with a focus on genuine products that offer some real value for money benefits to the customer? This appears to have been totally forgotten here.

LATEST NEWS:
(06/09/2010) Xzotto - not surprisingly - just announced it is closing down. A 3rd party is apparently going to relaunch it...
(24/02/2011) It's unclear, but the 3rd Party relaunching the Xzotto idea may be YoYo Lotto.
Try Love My Lotto instead. It's better value all round, and has a strong, friendly and helpful team in place to run it.